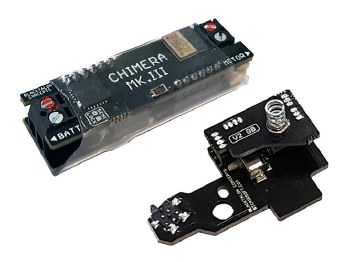 Smartphone Bluetooth Interface
Quickest and most versatile method of programming AEGs. No complex trigger inputs or opening the AEG.
Program your AEG mid-skirmish in seconds without any tools or manual, just your smartphone only.
User-programmable passcode and a shortened signal range prevents any unauthorized setting changes.
No need to "pre-connect" to the Spectre in the smartphone's settings. Is accessed instantly from within the app.
Fully certified by the FCC (USA), IC (Canada), CE (Europe), and ????? (Japan).

Essential App for Techs
Smartphone app reports battery voltage, current draw, and FET temperature. Basically a "wireless multimeter".
Reports timing of shot cycles and RoF, which helps fine-tuning the AEG to achieve the best possible cycle rate.
Diagnostic functions that display which microswitches are pressed in real-time and also what error has occurred.
Records total number of shots fired since the battery was connected and also for each trigger pull.

Active Braking
Eliminates the motor spin-down time to prevent the piston from over-traveling.
Assists in keeping the piston properly reset to reduce stress on the gearbox.
Prevents double firing on semi-fire in extremely high RoF setups.
Also driven by the powerful IRLS3034-7PPBF MOSFET.

Cycle Completion
Gearbox always completes the last cycle regardless of when the trigger is released.
Keeps the piston properly reset to reduce mechanical stress and allows the motor more consistent startups.
Replaces the default cutoff lever mechanism, eliminating the source of trigger jams on semi-fire.

Configurable Triple Fire Select
All three selector positions can be individually configured to provide over 700 unique combinations.
Available options for each selector position:
Safe
Semi fire
Auto fire
Burst [no interrupt]
Burst [interruptible]
Burst/Auto hybrid [burst no interrupt]
Burst/Auto hybrid [burst interruptible]
Semi/Auto hybrid
Semi/Auto ramping
Burst modes can be programmed to fire 2 - 10 shots per burst. Each selector can have different burst values.
[No interrupt] burst completes a full burst even if the trigger is released early.
[Interruptable] burst will cancel the burst if the trigger is released early.
Hybrid fire modes fires in burst or semi then transitions to full auto if the trigger remains held down.
Hybrid fire modes can be programmed to have zero transition delay or up to 1s delay.
Ramping fire mode fires in semi and switches to full auto if the trigger is rapidly tapped.

Hardware Semi-Only Lock
Lock can only be enabled or disabled by using a soldering iron to set a jumper.
Conforms to semi-only laws that forbid AEGs with readily accessible means of bypassing semi-only.

Realistic RoF Control
Both fire select positions can be individually configured with a different RoF.
Every cycle runs at full speed and pauses between each shot to reduce the RoF.
Provides the most realistic feel and sound compared to any other forms of RoF reduction.

Adjustable Precocking
Precocking stops the piston in a compressed state so the next shot is near-instantaneous.
The precocking is fully adjustable and thus also compatible with short-stroked pistons.
Offers improved realism and trigger response for sniper or low RoF builds.

Adjustable Firing Interval
After a semi or burst fire, ignores trigger inputs for a certain amount of time. Programmable up to 1s.
Helps restrict rapid firing in specialized builds, such as limiting a sniper build to firing one shot per second.
Lower intervals can also help prevent accidental "bump firing" on semi when using a feather trigger.

LiPo / LiFePO4 Monitoring
Monitors LiPo and LiFePO4 batteries to cutoff power before overdischarge occurs.
Simply set the number of cells and the controller will use the proper cutoff voltage.