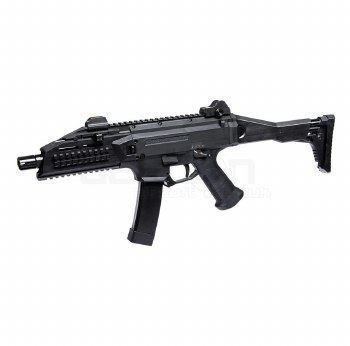 Features
Fiber reinforced polymer receiver w/ CNC machined metal outer barrel, flash hider, and barrel nut
Newly designed gearbox w/ QD spring change capabilities
Folding / removable stock
Electronically controlled ECU gearbox for better battery and motor efficiency while offering crisp trigger response
Functional bolt lock
Empty magazine detection
Ambidextrous controls
4 position fire selector w/ genuine 3-round burst capabilities
The CZ Scorpion EVO 3 A1 has been envisioned, developed and built by ASG, to bring the Airsoft player as close to the experience of handling the real EVO 3 as possible. Like a real gun, the EVO 3 will stop firing when its magazine runs empty, and require activation of the bolt catch after a reloaded magazine has been inserted. Where the standard in Airsoft is to replicate the exterior in appearance only, the EVO 3 is built to be as tough as the real thing. The internals have been purpose built to deliver advanced functions by using custom electronics, while having the strength necessary to handle both powerful springs and high-speed solutions.

ASG's CZ Scorpion EVO 3A1 has consitently exceeded the benchmarks for what is expected of an AEG, offering a combination of faithful realism, realistic construction and unparalleled shooting performance – right out of the box. Summer 2018 sees the unveiling of the next stage of the evolution of the first and only Airsoft gun to be designed and manufactured in Denmark.

With each revision the EVO has proven to consistently perform even better and has ensured it continues to eliminate all competition. Now though, after nearly 2 years of development and testing, we're proud to introduce the most significant updates to the EVO yet – udates that will redefine the standards of AEG performance.

The 2018 EVO 3 upgrades include a revised gearbox casing, smoother fire selector, optimized gear position, proprietary cylinder and cylinder head, as well as all new piston and piston head with optimized geometry.
The new cylinder set is compatible with other 3rd party Version 2 and Version 3 (M4/AK/G36) gearboxes and we intend to make it available as a separate upgrade component in the near future.
All 2018 revision specification parts are 100% inter-compatible with previous versions.
Features:
Fiber Reinforced Polymer: The ASG CZ EVO 3 is constructed entirely out of glass fiber reinforced PA6 polymers to replicate the durability, look, and feel of the actual CZ EVO 3 A1; which also in turn makes the weapon incredibly light weight and maneuverable
Newly Designed Gearbox: The gearbox has been completely redesigned to fully encase the cylinder, thus eliminating stress points allowing it to withstand high power/performance upgrades without sacrificing longevity. The new gearbox also serves as a heat-sink for the electronic components to help dissipate the heat generated from use
QD Spring Change Gearbox: The EVO 3 gearbox has a QD spring change feature allowing the spring to be swapped out quickly and easily without disassembly of the gearbox. This allows the guns FPS to be easily configured for field or CQB use
Folding / Removable Stock: The lightweight stock can be folded to the side or even removed entirely without tools to lower the profile of the gun even further
Electronically Controlled Gearbox: The new gearbox is controlled by an ECU to help reduce the number of electrical and mechanical parts. The ECU also helps with battery and motor efficiency while at the same time offering a crisp, almost instantaneous trigger response. The ECU unit also features short circuit protection which will shut off all electronics when water makes contact with vital components. The ECU unit will switch the electronics back on when the gun is once again safe to fire
Functional Bolt Lock: The mock bolt is able to be locked back to allow easy access to the hop-up controls as well as add to the guns realistic action
Empty Magazine Detection: Added for realism, the CZ EVO 3 will stop firing when the magazine is empty and will not fire again until a fresh magazine is inserted and the bolt stop is pressed
Ambidextrous Controls: The fire selector and magazine release can be actuated from either side of the weapon while the charging handle can be switched to the left or right side
4-Position Fire Selector w/ Genuine 3-Shot Burst: Thanks to the electronic trigger system, the fire selector positions match the original CZ EVO 3 for authenticity and realism. The fire selector features a safe position, semi-automatic, 3rd burst, and full-auto fire select fire modes
Battery Monitor: The weapons electronics have an integrated low power indicator which will shut the gun down when it detects the battery power level has dropped to unsafe levels; this safety measure protects the gearbox from unexpected lockups and the battery from over-draining
LiPo Ready: The entire gun was built from the ground up specifically to run on LiPo and LiFe batteries up to 11.1v right out of the box
ULTIMATE Basic Motor: ASG has added beefed up support bearings and shaft to its short motor to optimize power transfer while greatly reducing wear and noise
CNC Machined Parts: The outer barrel, flash hider, barrel nut, and gearbox are all precision CNC machined to ensure perfect fitment and stronger parts
Made in Europe
Manufacturer: ASG, Licensed by CZ


ASG Limited Manufacturer Warranty:
This Proline airsoft gun is backed by a 12 month limited warranty from ActionSportGames. Should this airsoft gun fail due to a defect in material or workmanship during the warranty period, ActionSportGames will repair or replace it, free of charge. Please see the included warranty card for warranty details.
About ASG
ActionSportGames is a worldwide leader in the business of replica firearms and accessories manufacturing – including Airsoft guns, Airguns, CO2 guns and firearms replicas. We specialize in 1:1 scale replica guns and accessories for fun, action, sports, entertainment and collection. Today were proud to be recognized as the innovator and manufacturer of the CZ EVO3 A1 AEG and having introduced several Airsoft versions of this popular Airsoft gun to the market.One of our goals is to become the preferred supplier in the firearms replica business through worldwide license agreements, quality brands and premium service – before, during and after sales.